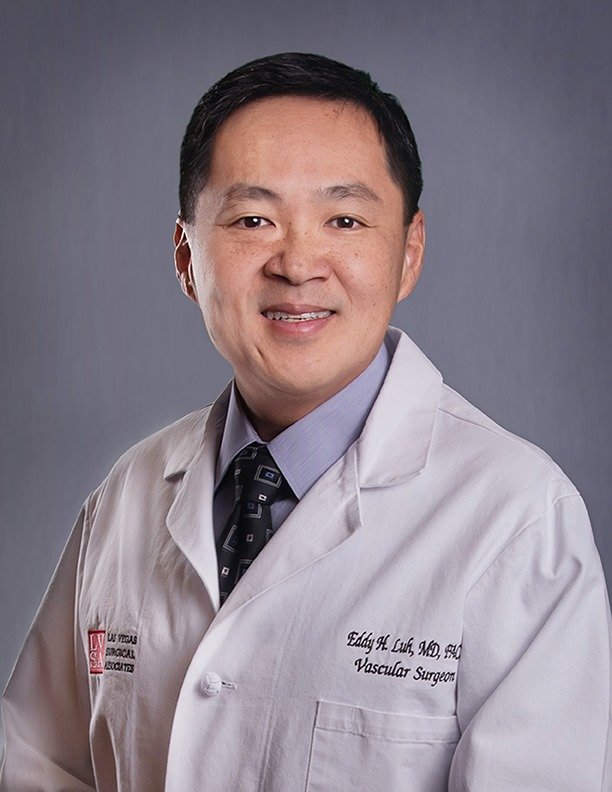 Dr. Eddy H Luh MD graduated from Cornell University. He then received his medical degree from the University of Vermont College of Medicine.

Dr. Luh completed his General Surgery residency here in Nevada at the University of Nevada Affiliated Hospitals. He then trained under legendary Dr Micheal E. DeBakey at the world-renowned Methodist Hospital, Baylor College of Medicine in Houston, TX where he completed a residency in Vascular Surgery.

After his Vascular Surgery residency, Dr. Luh moved back to Las Vegas, opening his surgical practice in 2001.

He is the Chief of Surgery and a member of the Medical Executive Committee at Valley Hospital. He is a clinical assistant professor at Touro University.

He has lectured on numerous diverse surgical topics and is a physician trainer for multiple surgical devices for various companies including endovenous laser ablation, remote endarterectomy and transilluminated powered phlebectomy. He was the first to perform Trivex, Remote Endarterectomy, and Transcarotid Artery Revascularization (TCAR) procedures in Las Vegas.

He has been voted “Top Doc” in Vascular Surgery on more than one occasion by his peers in numerous publications. He is a member of MENSA and the Society of Vascular Surgery.

The Vegas Golden Knights recognized him as a Vegas Strong Hero of the game.

He was one of the recipients of the “Inspired Excellence in Healthcare Awards” by the Las Vegas HEALS organization in 2018.

He is board certified in both Vascular and General Surgery and has special interests in vascular surgery, endovascular interventions, and venous disease.

"I would certainly recommend Las Vegas Surgical Associates and have spoken highly of their services to friends. The results of their procedure to correct my varicose veins have been excellent!"

"You have done wonders with veins in both legs. I am so pleased with the results. Besides being so professional, the staff are especially nice people. I would highly recommend Las Vegas Surgical Associates!"

"I found Dr. Luh and his staff to be very caring and professional. I would highly recommend EVLT to my family and friends. I had zero pain or discomfort!"