What is diverticular disease? 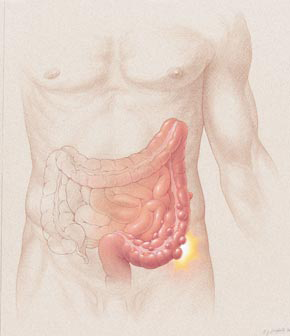 Complications can occur in about 20 percent of people with diverticulosis. One of these complications is rectal bleeding, called diverticular bleeding, and the other is diverticulitis.
Diverticulitis occurs when there is inflammation and infection in one or more diverticula. This usually happens when outpouchings become blocked with waste, allowing bacteria to build up, causing infection.

Risk factors believed to be involved in the development of diverticular disease include aging, excessive straining and constipation, low fiber diet. 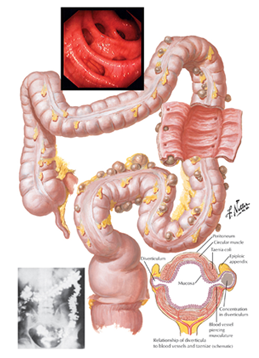 What are the symptoms of diverticulitis?

The classical symptoms include left sided abdominal pain mainly over the lower left side, abdominal cramping, and possibly fever.

What tests help to find diverticulitis?

If your doctor suspects diverticulitis, then the best test to diagnose this is with a CT scan. You will probably also drink some oral contrast and receive some contrast via an IV prior to the CT scan.

What is the treatment for diverticulitis?

After a first episode of diverticultis, you will generally receive antibiotics (oral or IV) as well as bowel rest to allow the acute infection to subside. Depending on the severity of the infection, you may or may not be admitted to the hospital. Once your pain starts to subside, you will be placed on a low residue diet.

After a one-time attack, patients do not generally need surgery unless they are below the age of 50. IF you have recurrent attacks of diverticulitis, then a surgeon will recommend surgery to prevent further recurrences.

If you develop an abscess inside your abdomen from the diverticulitis, you may need to have a radiologist drain the abscess with a needle.

When is surgery indicated for diverticulitis?

Surgery is indicated if you have repeated attacks of diverticulitis, if you have partial or complete blockage in your intestines from diverticulitis, if there is evidence of a bowel perforation causing a widespread infection in the abdomen, and finally if a communication (fistula) develops between the affected bowel and any surrounding structures such as bladder, uterus, or skin.

In emergent situations, when there has been perforation in the intestine, two operations are usually involved.

The first operation involves removing the infected bowel. Due to local inflammation and infection, the bowel is usually not healthy enough to reattach and the patient is left with a colostomy. A colostomy is a temporary situation in which the colon is brought up to the skin. Stool will pass through the colon, through this stoma and into an attached bag. The colostomy is typically left in place for 3-6 months to allow the infection and inflammation to heal inside.

The second part of the operation is when the colostomy is reversed and reconnected to the remaining colon so that you can resume going to the bathroom normally.

In an elective situation, the segment of chronically affected bowel will be surgically removed, with the two remaining ends reattached at the same operation. 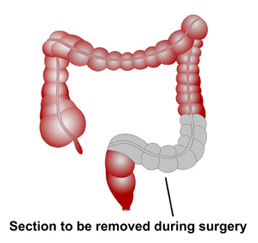 Risks of surgery for diverticulitis?

As with any operation, there are always associated risks. There is a risk of bleeding during surgery or developing an infection after surgery. Sometimes the ureter on the left side can also be injured during the course of the operation albeit seldom. Finally, even after a successful operation, there is a still a chance you may develop diverticulosis in other parts of the remaining colon.